The War In Orbit: The X37-B & Earthquake Weapons 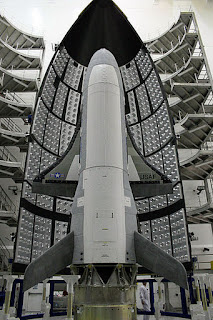 In the last few months, much has been written and discussed regarding the newer range of US orbital spacecraft: known as the X-37 program. The history of this technology is eyebrow raising to say the least, but it is the possible implications that have set internet forums alight. The craft is essentially an unmanned space plane, launched atop an Atlas V rocket. Weighing in at 11,000 pounds and measuring approx. 9.5 feet high, 30 feet long and 15 feet wide, it is capable of deploying solar panels to provide electrical power in orbit and has a cargo bay for numerous mission payloads. The nature of these payloads has raised questions, given that any specific mission details have remained a closely guarded secret.
Acknowledged publically (at least) is a mandate to “launch a surge of small satellites during periods of high international tension. This would enable America to have eyes and ears, orbiting above any potential trouble spot in the world” (Pentagon sources). There has been speculation that it is testing spy technology, or is the first step towards a space weapon which could take out rival countries' satellites or drop bombs from orbit. The oddest indication of a more sinister project came from Air Force deputy under-secretary for space systems Gary Payton: “We, the Air Force, have a suite of military missions in space and this new vehicle could potentially help us do those missions better…. If these technologies on the vehicle prove to be as good as we estimate, it will make our access to space more responsive, perhaps cheaper, and push us in the vector toward being able to react to war fighter needs more quickly.” Interesting use of the term “War Fighter”…

Examining the history of the project does have the effect of switching on some overhead light bulbs. What ‘officially’ began in the late 1990s was originally a NASA project. NASA awarded Boeing a $301 million contract for two X-37 vehicles in 2002, with the vehicles constructed by Boeing Co.'s Phantom Works. Due to ‘alleged’ budgetary problems, the project ended up in the hands of the Pentagon's Defence Advanced Research Projects Agency (DARPA) in 2004. The USAF also got on board by 2006. All these institutions have been involved in numerous black ops projects over the years and have given researchers just cause to question whether the X-37 is another covert operation. Hundreds of millions of dollars have been spent on the X-37 program, but the current total has yet to be revealed. The budget for the X-37B, also called the Orbital Test Vehicle, is classified and the Air Force refuses to disclosed any of the craft's activities in space 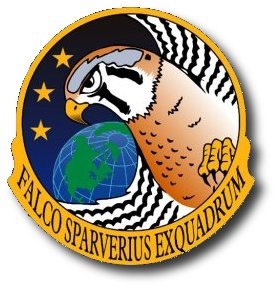 The project is always referred to in the same sentence as DARPA’s Falcon program or "Force Application and Launch from CONUS." This centres on a small "reusable Hypersonic Cruise Vehicle (HCV) capable of delivering 12,000 pounds of payload at a distance of 9,000 nautical miles from [the continental United States] in less than two hours." The budget for this program came at the same time as DARPA became involved with the X-37 program and was allocated by George Bush from a 2004/$459 billion bill that provided $100 million for a new "prompt global strike" program.  Global Strike could deliver a conventional, precision-guided warhead anywhere in the world within two hours, via a hypersonic platform.
According to DARPA, the reusable vehicle could "provide the country with significant capability to conduct responsive missions with quick turn-around sortie rates while providing aircraft-like operability and mission-recall capability.” The vehicle would be launched into space on a rocket, fly on its own to a target, deliver its payload and return to Earth. With this in mind, one could argue that the X-37 & Falcon are under the same operational banner. One would therefore also assume that the X-37 is a military application. 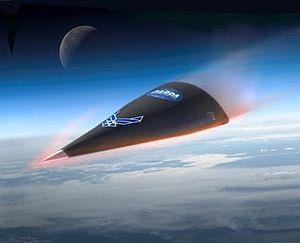 Within the Falcon mandate was the “X-41 Common Aero Vehicle (CAV), a common aerial platform for hypersonic ICBMs and cruise missiles, as well as civilian RLVs and ELVs. The prototype Hypersonic Technology Vehicle 2 (HTV-2) first flew on 22 April 2010; the second test flew 11 August 2011. Both flights ended prematurely.” (Wikipedia) There was also the controversial “fighter-sized unmanned aircraft called "Black swift" (also known as HTV-3X) which would take off from a runway and accelerate to Mach 6 before completing its mission and landing again.” DARPA & USAF signed off on the project in September 2007 and allegedly cancelled it within a year. “On 17 November 2011 there was a successful hypersonic glide test flight launched via rocket from Hawaii of the Advanced Hypersonic Weapon (AHW). The target was on Kwajalein atoll in the Marshall Islands. The AHW has a shorter range than the HTV-2 and is also part of the Prompt Global Strike program.” Many of the Falcon’s attached projects involved the likes of Lockheed Martin Skunk Works, Boeing, and ATK: something worth noting when you thoroughly research the darker corners of developmental or classified technology…
You might say, “This is all well and good, thanks for the tech spec history lesson, but what does this have to do with Earthquakes?”
Following the success of the first 270-day mission in 2010, the second launch (the X-37B - in March 2011) has been studied closely by numerous amateur and expert Sky Watchers. With the X-37B in Earth orbit for the large duration of this year, watchers have been able to track its trajectory, plot its orbits and post their findings at the SeeSat-L website (satobs.org) and others. Greg Roberts of their group found the USAF's X-37B OTV 2-1 space plane which became identified as Catalogue Number 36514, 2010-015A, OTV-1. "If memory is correct, we have found and are tracking every single object launched in the past five years or more. The only objects we are not able to track are those stationed over areas of the earth where we have no active observers… mainly the central Pacific Ocean area." 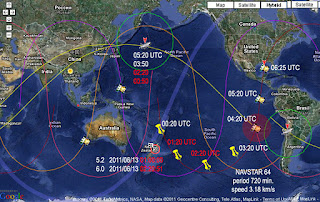 A number of researchers took these flight paths and attempted to match up times and locations with some of the Earthquakes of 2011. Eerily, many synchronise within a few hours or miles of each other. Is this just a coincidence? Speculation about EQ weapons has been around for a while now and despite claims from political leaders, scientists, geologists, etc., the ‘mainstream’ view is that of science fiction speculation. Such attitudes could be valid, if it were not for the ever growing research into exotic weaponisation, DEWs (Directed Energy Weapons), KEWs (Kinetic Energy Weapons), etc.
The Pentagon’s allocation of military budgets becomes more bizarre with every passing year. Both the US Senate and the United Nations have discussed the weaponisation of Earth orbit on numerous occasions. Such discussions have rarely been confined to solely “conventional weapons”. The US military has long sought such measures.
The 1995/1996 US Air Force research document: Air Force 2025 discusses The Global Area Strike System (GLASS) which consists of a high energy laser (HEL) system, a kinetic energy weapon (KEW) system, and a trans-atmospheric vehicle (TAV). The HEL system consists of ground-based lasers and space-based mirrors which direct energy to the intended target. The KEW system consists of terminally guided projectiles with and without explosive enhancers. The TAV is a flexible platform capable of supporting maintenance and replenishment of the HEL and KEW space assets, and could also be used for rapid deployment of special operations forces. Target definition and sequencing is managed externally using GIMS. The document also discusses space elevators, weather modification (HAARP and Chemtrails), various DEWs, Hypersonic Attack Platforms and much more. Here is the link: http://csat.au.af.mil/2025/index.htm 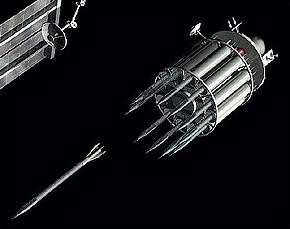 Some websites have also mused about KEWs, in relation to the X-37B. “A kinetic bombardment is the act of attacking a planetary surface with an inert projectile, where the destructive force comes from the kinetic energy of the projectile impacting at very high velocities.” (Wikipedia) “Rods From God” & Project Thor (Jerry Pournelle originated the idea for a weapons system that launches kinetic projectiles from Earth orbit to damage targets on the ground,  while working in operations research at Boeing in the 1950s) are discussed at length. Sadly, many of these possibilities are dismissed into the realms of Science Fiction… 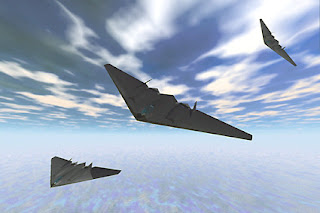 As a postscript, it is worth noting that the TR-3B (USAF Flying Triangle) had a similar route through the hands of the agencies that have steered the X-37B program. The TR-3B has been quantifiably connected to gravity warping systems, Phantom Stealth technology, noise cancellation technology and a host of Top Secret hardware. The craft has been down played as non-existent or extra-terrestrial in origin, however there are a huge number of engineers and scientists who beg to differ. How is it that we can accept this a little more readily than the possibility of an unmanned shuttle creating Earthquakes? I suspect it may be in the same way that people can believe in ghosts (as an example), but not a cover-up surrounding the events of 9/11 (No offense to believers in ghosts!)...

Maybe this connection between the X37-B and EQs is too intangible.
Maybe it lacks the publically fired imagination of other matters.
Maybe there just isn’t enough proof.
Maybe it’s all just a coincidence.
It’s up to you to decide.
Till Next Time!
The Truth Seeker’s Guide
Posted by The Truth Seeker's Guide at 00:09