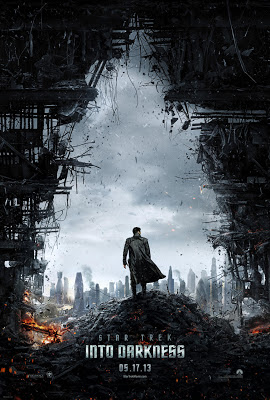 I roll my eyes with disbelief at this one! Publicity material is starting to filter through in preparation for the release of the new Star Trek movie: “Into Darkness”. The teaser trailer finally confirms everything I have been saying about the current state of the franchise that continues to “boldly go”…

Those of you who follow my blogs will know that I have been a lifelong ‘trekker’. A few months back, I posted a three part article which addressed the journey of this TV and Hollywood behemoth. Although I have no doubt that there have been many occasions when certain individuals behind the typewriters and keyboards of Trek have attempted to convey something quite profound and revealing to the viewing public, I also know that the franchise is now firmly in the hands of those who care nothing for a more enlightened world.

You could argue that this is simply a product of the current modus operandi of the industry – an unstoppable machine that churns out mass distraction and the mantras of social engineering archetypes and narrow minded perceptual management.

So it is with a great sense of disappointment that I believe my suspicions have been confirmed. Those who currently steer the franchise have firmly nailed their colours to the mast, as witnessed in the new teaser trailer and poster artwork. With blatant allusions to 9/11 (see the poster!), the promotion of catastrophism, undercurrents of returning “false messiahs” wreaking havoc and some trailer narration talking about how the world is an illusion designed to keep us all happy… well, you know that they are just rubbing our faces in the proverbial.

The truly sad thing is that many folk (including, I suspect, some Trek fans) just won’t have a clue. RIP Trek… the last nail in the coffin.

Crikey, what a blatant piece of imagery. What were they thinking of... I can never guess...

Cheers Andrew.
My thoughts exactly!
I doubt they can get more obvious than this without actually inserting clips of bull**** from the news!
Carl (The 'Guide)

Namaste brother Carl; into the darkness we go. Looks to me like they are trying to tell us something.

In Lak'ech, brother, prosper with love live with peace...

Hey Carl I just hope the original Star Trek will always be held in high esteem. It was truly a remarkable trend setter back in the day The best to you and yours my friend

Cheers Chris.
It is my own personal view on the current state of Trek that they are now offering us next to nothing of benefit or enlightenment.
It seems that the franchise is just another bums on seats, FX fest with little to say... something that doesn't surprise me when you research the creative individuals who are behind the scenes of these movies.
All the best!
Carl (The 'Guide)

Cheers Cap.
I'm certain it will.
Even some of the latter incarnations still gave plenty of food for thought.
I often wonder why thoughtful science fiction has been largely abandoned in favour of 'dumbing down'.
Sign of the times I suppose...
All the best!
Carl (The 'Guide)

Am a die-hard dedicated Trekkie as well. This series along with The Matrix Trilogy, is one of my very all-time favorites. I have watched every Star Trek Series Episodes (I mean all) and the movies. The are all polluted with Freemason and Illuminati Symbolism.

If you look at the recent Trek Film with Chris Pine (I think is one of the better Star Trek Films), I can give you at least 20 or 30 SYMBOLISM in the first 10 -15 mins of the film. I could be here for hours talking about star trek with you Carl. I'll just give you a few samples from that movie...

James Kirk's father was Capt of the Kelvin for 12 mins before he dies. 12 = Zodiac

Look at the scene when Kirk is in the hearing for cheating on he Test. Look at the shape of the gallery, a visual Pyramid. There are 2 levels, 2 Guards, 2 columns (i.e. the WTC twin towers represent 11 or death. So 2+2+2 = 6 = sacrificial.

Never used the color blue on the Warp Drive Nacelles before. Blue represent flooding of the EARTH.

For the people who think MOVIES are just made up for our entertainment & to make money, is so far from the truth it's ridiculous. All our movies are intended to tell us what they (elites) have done, what they can do and what the will do to us. Literally through story telling, symbolism, METAPHORS, truth and intentional or unintentional lies. It's all there to keep you in the trance, to believe this life is our true reality which it's not.

The movies tell you much more truth of our human manipulation that most seem to know. Are movies factual? Not really. It's a veil to hide who we really are...WISDOM is what we are and not this piece of shit human shell that is a3D Illusion.

Carl, be well my friend.

Cheers Ian.
I would argue that it is the case for the vast majority of every aspect of the entertainment industry.
In the the case of films, they seem to fall into two categories:
films that are trying to tell us something/alert us/enlighten us, or films that include the symbols and messages as a form of passive eye/brain candy that we are encourage to accept as normal, fashionably stylish or "just there".
Sadly, the vast majority of output falls into the latter category.
All the best!
Carl (The 'Guide)