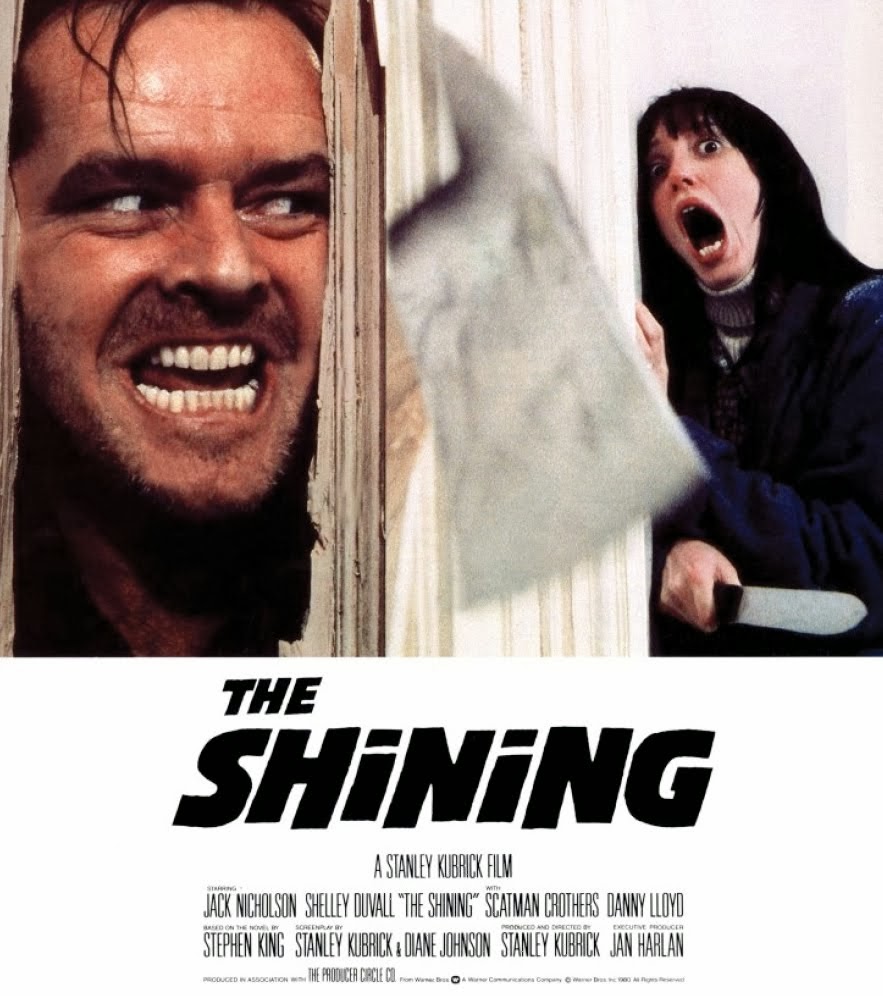 Stanley Kubrick’s film “The Shining” was loosely based on Stephen King’s novel of the same name. King had written a screenplay adaption of the novel (for Warner Bros.) before Kubrick became attached to the project. Kubrick chose not to read the script because he intended to infuse the bare bones of the story with his own ideas. King’s fans are sizeably unfavourable of Kubrick’s adaption. Although most of the plot is there, the message and emphasis is very different from the original novel. Some researchers (most notably, Jay Weidner in his documentary film “Beyond the Infinite: Kubrick’s Odyssey II” http://jayweidner.com/) have studied “The Shining” and believe that the film is so markedly different because Kubrick used it to somehow make a confession to the world about his alleged involvement in faking the Apollo 11 Moon landing.

The film does appear to have some form of subtle code embedded in the imagery and narrative. The scenes in the manager’s office (where Jack Nicholson is interviewed for his job as custodian of The Overlook Hotel) are curious. The manager, Stuart Ullman (played by Barry Nelson) bares a passing similarity to the assassinated US President John F. Kennedy – who swore that mankind would “go to the Moon”. Ullman is dressed in red, white and blue (the colours of “Uncle Sam”) and wears a hairpiece that increases his JFK lookalike persona. Framed in the centre of the office window is a statuette of an Eagle – “The Eagle has landed”. The Apollo 11 module was called “The Eagle” and the mission patch features the image of an Eagle. The Eagle is also used as a symbol of the US political, economic and military power structure. It also features prominently in freemasonry. All three of the Apollo 11 astronauts were/are freemasons. It has been suggested by a number of researchers that the scenes between Ullman and Jack are a representation of Kubrick’s “deal” with the agenda players. 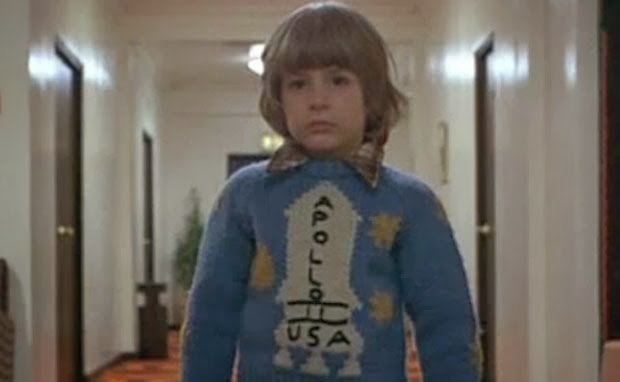 The key moments that connect to the Apollo program involve Jack and Wendy’s young son, Danny. Danny is witnessed sitting on the carpeted floor of a Hotel corridor playing with his toy vehicles. The toys are arranged around a hexagon shape that constitutes part of the carpet pattern. Not only is this shape very similar to the shape of NASA’s Saturn V launch pad, but the hexagon shape is intrinsic to the ritualistic “Saturn Worship” belief system. Danny sits in the centre of the hexagon. As he stands up from the centre of the shape, the picture on the front of his woollen sweater is clearly visible. It is a white rocket with the words “Apollo 11 USA” on it. 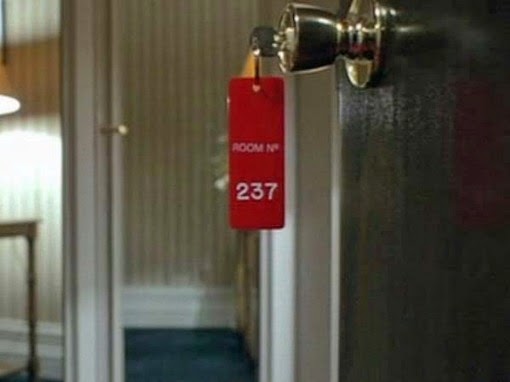 Danny walks from the hexagon, along the corridor to a room with an open door. The room is 237. In King’s novel, the room was 217, but Kubrick decided to change it. According to Jay Weidner, the American Heritage Science Dictionary states that the Moon travels around the Earth at an average distance of about 381,600km (or 237,000miles). 237,000 miles = Room 237. The key tag in the door reads “Room No 237” – the letters can be loosely rearranged to spell “Moon Room”. When Danny exits Room 237, he has marks on his face and the sweater is torn. He falls silent and refuses to talk about what happened in the “Moon Room”. 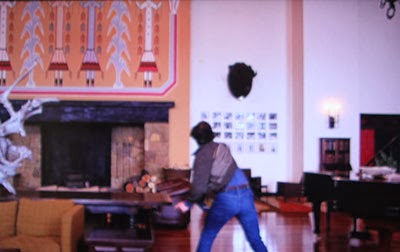 There are also other noteworthy, but less defined, pointers throughout the film. The opening scene shows a landscape that is reflected in a lake and appears to form the letter ‘A’. The reflection has also been interpreted as “that which is above, reflected below” – i.e.: The Moon on the Earth. In the scene where Jack sits at the typewriter, he is filmed from behind. He is surrounded, and framed, by architecture and a chair with motifs that allude to the number 11 (Apollo 11). Above the fireplace (in the Colorado Lounge) are huge paintings of Indian Totems that look similar to the Saturn V rocket taking off. The apparitions of the murdered twin girls may also allude to Gemini (represented by twins) – NASA’s Gemini project preceded the Apollo program. The food storage room also contains shelves of “Tang” – a drink that became synonymous with the US space flight program.

At one point, Wendy and Danny are seen watching TV. Bizarrely, the position of the television set clearly shows no mains cord leading to a power point. How is the television even working? Are the images on the screen somehow being faked? Jack is also seen tampering with the Overlook’s main communications in the manager’s office, cutting off transmission to the rest of the world.

The Adler typewriter appears to change colour to a dark shade of grey midway through the film. It is clear that this would not have occurred under Kubrick’s meticulous auspices – not unless he intended it. In fact, this appears to be the case: scenic artist Ron Punter was instructed to repaint the typewriter by Kubrick himself! Also, “Adler” is the German word for “Eagle” (“The Eagle has Landed”) – German scientists and engineers were key to establishing NASA and initiating the Apollo space program. 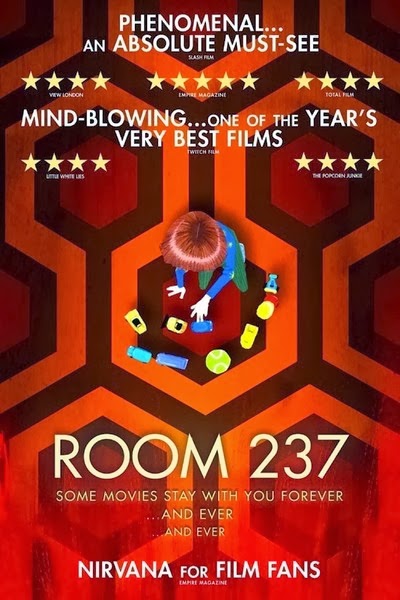 The German angle is further examined in the 2012 documentary “Room 237” (directed by Rodney Ascher and produced by Tim Kirk). The documentary presents the notion that (alongside the Apollo 11 cover-up and the genocide of the Native Americans) Kubrick’s film is an examination of the WWII Holocaust.


It has been claimed that Kubrick took an interest in Nazi memorabilia and spent a substantial amount of time and money building up a collection. There appears to be no apparent evidence of this claim though. However, Kubrick did have a connection to this period of history via his wife Christianne, whose uncle Veit Harlan was a writer and director of Nazi propaganda films for Goebbels.

Kubrick’s personal assistant Leon Vitali has been incredibly critical of “Room 237”. “That was Stanley’s typewriter,” he said. “A lot of decisions made on the set were about pragmatism: ‘This looks good. It sits on the oak table pretty perfectly.’ Not to mention, it’s a great typewriter. I used that typewriter for 10 years, actually.”
http://www.nytimes.com/2013/03/31/movies/aide-to-kubrick-on-shining-scoffs-at-room-237-theories.html?hp&_r=0
Finally, The Overlook Hotel has a huge garden maze in the grounds. The arrangement of the maze is bewildering and confusing - both to the viewer and the characters that enter it. Metaphorically, only a guide would know how to navigate the maze. Is Kubrick this metaphorical guide?

At the close of the film, a photograph, containing the image of Jack, is shown on the wall. The photo is the 11th picture on the wall and (in close up) Jack is in a crowd of 11 people. He is clearly seen to be hiding a piece of paper in his hand. What does this represent?


For further research on the allegorical and symbolic importance of “The Shining”, I highly recommend Jay Weidner’s research. The film is also examined in the interesting documentary “The Shining Code 2.0”http://www.youtube.com/watch?annotation_id=annotation_860992&feature=iv&src_vid=a2g-qvloXns&v=b0hOiasRsrA
An excellent article, entitled “Stanley Kubrick’s Keys to the Shining”, also examines the minutiae of details included in the film and their larger esoteric significance. http://lickmyweb.com/headlines/stanley-kubricks-keys-to-the-shining/

The soundtrack to the film “The Shining” also contains audio artefacts that sound like a human voice saying the word “shone” at specific moments in the film. It is interesting that “shone” is the past-tense term for the word “shine”. The Shawn Montgomery documentary “The Shone Report” describes the film as “one of the most analysed films of all time. There is something quite extraordinary going on just beneath the surface. Whereas this is true of all of Stanley Kubrick’s films, The Shining stands out as his most confusing and intricate film exercise.” http://www.youtube.com/watch?v=c1v9EKLQD_g
“The Shone Report” examines sixteen (although some people claim there are more) identical audio markers that appear to be strategically placed in the first 48 minutes of the film. Jack Nicholson looks directly into the camera precisely as three renditions of the word “shone” are heard. The first and last of the 48 audio artefacts occur as the narrative deals with themes of communication – the first as a telephone rings and the last as Wendy talks to the Ranger over the radio. In the film, the act of “shining” is a form of mental communication. Each example of “shone” occurs relative to a question being posed – usually one asked by a character.

Some people claim that this voice sounds remarkably like Kubrick himself. It is claimed that these artefacts are simple mistakes or imperfections in the film’s audio track. However, it is worth remembering that Kubrick was a meticulous master-craftsman who overlooked no detail – no matter how small. Is it possible that these artefacts are a cypher of sorts? I believe that some serious attention needs to be paid to this, perhaps even involving a sound technician back-engineering the soundtrack. It may be possible that these artefacts can provide clues to additional references within the film itself.

In Part 5, I will examine Kubrick's "A Clockwork Orange", connections to mind control, and the larger global agenda.
Stay Tuned!