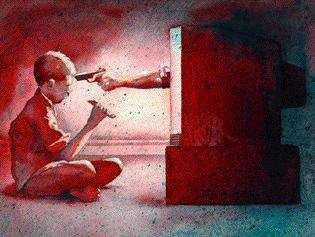 It is astounding how people sometimes miss what is blatantly staring them in the face. The mainstream press has made no attempt whatsoever to hide what is glaringly obvious, in relation to London Olympics’ opening and closing ceremonies.  No doubt we have only seen a fraction of what is to come, but (make no mistake) what we have here is a shady pantomime of metaphorical allusion and multiple level meanings. You could argue that this is the nature of “art” and “performance”, but not enough to start running for the hills.

However, I have serious concerns about the medium (as I have tried to espouse here many times) and can only conclude that the “entertainment industry” is far from innocent or “harmless fun”. There are times when this “distraction” is all but weaponised, resulting in a crippling psychological attack on many susceptible individuals. You may say that I’m engaging in my own type of fear mongering here, but (and I speak from a level of experience) I believe these concerns are justified. I urge people to always be cautious and never underestimate the medium simply because it is bright, shiny and keeps us content. All that glitters is not gold.

The “spectacles” that will book-end the 2012 Games are no different in this case, with a crucial exception. There is a potential for the proceedings to be viewed by a huge, huge number of people – much more than your average TV program. In fact, it has been predicted that a combined TV audience could number (according to varying sources) somewhere between 1 - 4 billion people!

Danny Boyle has been charged with overseeing these events and has revealed some curious aspects that should be considered. The opening ceremony has been entitled: “The Isle of Wonder”. Much of this has been modelled on Shakespeare’s “The Tempest”, an unusual choice of literary influence. I don’t want to really address the various musings on Shakespeare himself here, because it is vast subject… but worth researching!

“The Tempest” is a real oddity though. If you haven’t read much Shakespeare, then it is important to note that that it sits in contradiction to the tone of his other works – imagine Shakespeare on Acid and you’ll get the idea! The story of magic and ritual to draw individuals to an island, where they witness Prospero’s final creative act of magical rite, seems to be at the heart of the London ceremony. The act serves as a nexus point between the past and the future, one age to another. This transition is noticeable in Blake’s Jerusalem, which also features heavily in the proceedings. Blake once wrote that “the eye altering, alters all". This is an interesting observation given his extensive freemasonic / esoteric associations. 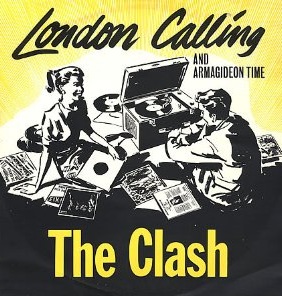 The use of illusion and “magic” therefore, appears central to this aspect of London 2012. This “invocation” is apparent with the use of the “Olympic Cauldrons” and the torch, which has saturated the news of late. There are other examples though. The use of The Clash’s number, “London Calling”, may appear to be a simple summoning of people to The Games, but the lyrics reveal much more and may indicate why the song has featured so heavily.

The most remarkable line: “London calling to the underworld”, seems to tie directly into the idea of ritual and invocation. The dark aspects include: “Come out of the cupboard, you boys and girls” (an aspect I will address in the final part of this blog series), “London calling, see we ain't got no high… Except for that one with the yellowy eyes” (reference to a dark deity perhaps?) and “cause London is drowning, and I live by the river” (the river of the underworld maybe?). The line: “London calling to the zombies of death… Quit holding out, and draw another breath”, probably doesn’t literally mean “Zombies” - as I addressed in part 2 of this series... but I recently came across a strange story that may connect.

Allegedly, the event organisers have contacted various agents about the “inclusion” of dead musicians / celebrities for the opening ceremony! What “inclusion” means is open to debate (and the story could just be a piece of plop), but I know that several researchers have addressed the “return” of notable figures who have died. Could we see the implementation of the holographic technology I discussed previously, creating the illusion that the likes of John Lennon, Keith Moon and Amy Winehouse have “risen from the grave”!? Who knows, but if it happens, it’s a little sick. These people were probably steered, tampered with or disposed of (in my opinion) by various aspects of the entertainment industry “agenda”. They deserve to be left in peace now… 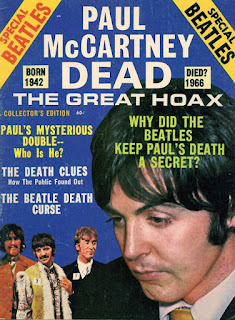 On a related matter, it has not escaped the attention of many that musical “impresario” Mark Ronson will be involved in the ceremony. His “connections” are vast and has worked extensively with artists who are alleged to have been “messed with”. Danny Boyle’s long-time collaborators “Underworld” have also been tasked with overseeing the musical aspects. I don’t need to say any more than to highlight their name! Paul McCartney (don’t get me started on him!) will also be closing the night with a “live” performance.

The list of music to be included has circulated for a little while now and (although we can’t be certain as to how accurate it will be) it includes some curious tunes. “God Save the Queen” by the Sex Pistols, “Going Underground” by The Jam, “Chariots of Fire” by Vangelis (interesting collaborator with Ridley Scott and the song title is a reference to Blake’s” Jerusalem”), “Relax” by Frankie Goes To Hollywood, “Trampled Under Foot” by Led Zeppelin (strange choice!), “Step On” by The Happy Mondays (some more foot trampling), “Rolling in the Deep” by Adele (more water metaphors), “Eclipse” by Pink Floyd (which is about insanity), “I Predict a Riot” by The Kaiser Chiefs, and allegedly “Absolute Beginners” by David Bowie (great tune, but the song title says a lot), you get the idea anyway. 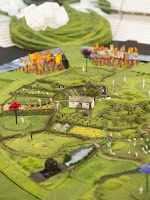 The proceedings which also include acrobatics troupe “Spellbound” (the name says it all really) and an introductory film featuring Daniel Craig as “James Bond” (huge area of alternative research there) will be entitled “The Arrival”. The “Green and Pleasant Land” motif has been decked out with farmers “working the land” and 12 horses, three cows, two goats, 10 chickens, 10 ducks, nine geese, 70 sheep and three sheep dogs. It would probably been cheaper to hire a farm and hold The Games there! There will also be a load of UK military personnel pouring from the top of The Glastonbury Tor mock-up! WHY!? 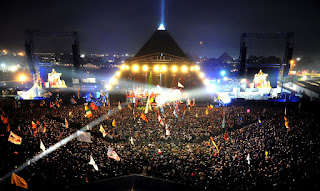 The Glastonbury aspect is particularly revealing because of the obvious link to ritual and energy. As David Icke puts it, “energy flows where attention goes”. It is also the home of the ritualistic natured, Glastonbury music festival – an event bedecked with its very own pyramid stage. There are often some peculiar incidents and phenomenon that occur at this festival. One of the most fairly recent, that caught my attention, was the strange death of the Tory MP - Christopher Shale (a close friend of David Cameron), but I’m digressing.

There are also the “fake clouds” to make it rain. There has been much conjecture about the weather for the ceremonies and the inherent weather modification facets that (seem to) often go hand in hand with The Olympics. This speculation has been fuelled by the bizarre summer conditions that we’ve seen in the UK of late. Some even suggests that clear skies (as with 9/11) make for better trickery. Even leaving this aside, the “fake clouds” alone assist the nature of the “illusion”. 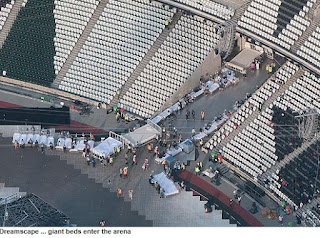 On the subject of “capturing” the imagination of the masses with this huge ritual, I was initially mystified by what role a load of oversized beds would be playing in the ceremony. Some have suggested they are hospital beds, given the inclusion of NHS nurses and the NHS story in the ceremonial narrative. I have wondered if there may be deeper implication though. Illusion is readily concomitant with the notion of dreams, sleep and unconscious states… and where do we usually do this? In bed! There is also a broader context here which factors into states of mind (and is a big clue to my own theories) which I'll look at in the final part of these blogs. 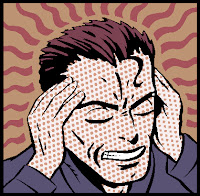 If something is being invoked in a symbolic / ritualistic way and potentially a few billion sets of eyes are watching, then that’s a lot of “soul capture”! If nothing else, I believe this may well be the event that has been predicted in the alternative community. I’m not saying that something else won’t occur (we can never be totally sure until it happens!), but the evidence for an illusory ritual is very strong. Of course, all of this depends upon whether or not you believe that this kind of thing has any effect on the human psyche. I believe that (in many cases) it sadly does though. Suggestibility and subliminal persuasion are utilised on a vast scale by the media. If they have invested so much time, manpower and money to the practice, then I believe we can’t ignore the reality.

There is one more piece of related evidence (that is particularly damning) that may have been misinterpreted by the alternative community, which I will look at it in the final part of this
blog series… as well as my own theories.

The Opening Ceremony of The London Olympics 2012 -
http://thetruthseekersguide.blogspot.co.uk/2012/07/the-opening-ceremony-of-london-olympics.html

The Who Sell Out - London Olympics Closing Ceremony -
http://thetruthseekersguide.blogspot.co.uk/2012/08/the-who-sell-out-london-olympics.html

The Paralympic Games, Saturn Worship and Other Oddities -
http://thetruthseekersguide.blogspot.co.uk/2012/08/the-paralympics-saturn-worship-and.html

Hey Carl. All I can say is WOW.The amount of data and informaton you possess and share with us is simply amazing my friend.You are spending so much time to try and share with us some important things to think about and I for one really appreciate the effort you have taken.You are a "Voice" that is very important to this planet. So keep up the great work you are doing.I firmly believe that if I was to be able to sit and talk with you that I could spend at least a week or so jst gaining much needed wisdom from you! The best to you and yours my friend!

Many thanks Cap!
As I have said, this is the collected research of others, with a minimal amount of my own input. I just try to soak up as much of it as I can.
I appreciate all the support, never the less!
All the best my friend.
Carl (The 'Guide)

For me, the Olympic's official song is self-explanatory.

Whatever it takes
You won't pull ahead
I'll keep up the pace
And I reveal my strength
To the whole human race
Yes, I am prepared

Whatever it takes
You won't pull ahead
'Cause I'll keep up the pace
And I reveal my strength
To the whole human race
Yes, I'm gonna win !

Muse were a very unusual choice for the Olympic song. Matt Bellamy was really into the esoteric / alternative (although I'm not sure where he stands now). At any rate, their music / videos are full of allegory and symbolism, etc. Cheers!
Carl (The 'Guide)